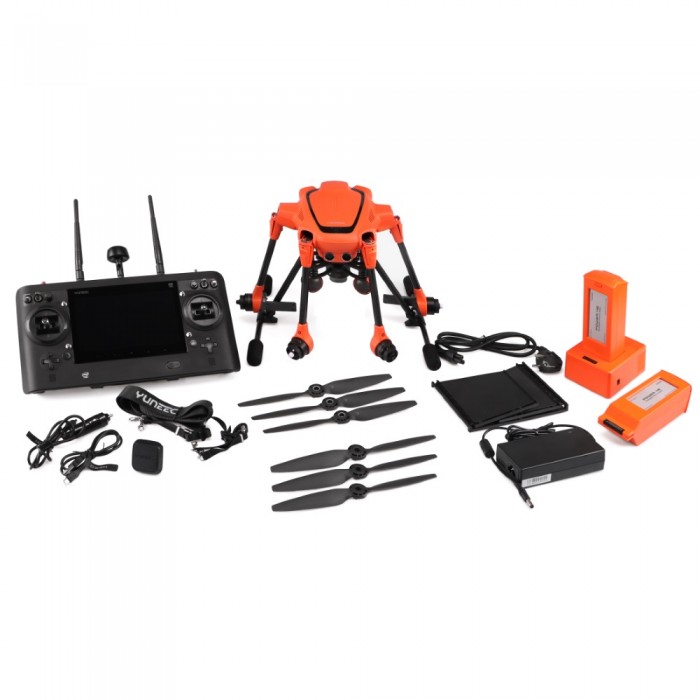 Pioneering Hexacopter System
The H520E-OFDM Hexacopter was specially developed for commercial drone applications and provides SAR ground teams, inspectors, police, fire brigades and surveying teams with a versatile tool. The H520E-OFDM is a robust, powerful and flexible UAV platform that can be ideally adapted to individual requirements and thus enables a variety of industry-specific applications. Long flight times and high-quality camera systems with embedded GPS data allow an area to be recorded quickly and precisely, while the interference-free precision compass enables flying even in previously difficult-to-fly environments. In addition to the performance and flexibility, great emphasis was placed on the drone's flight and data security when developing the platform. 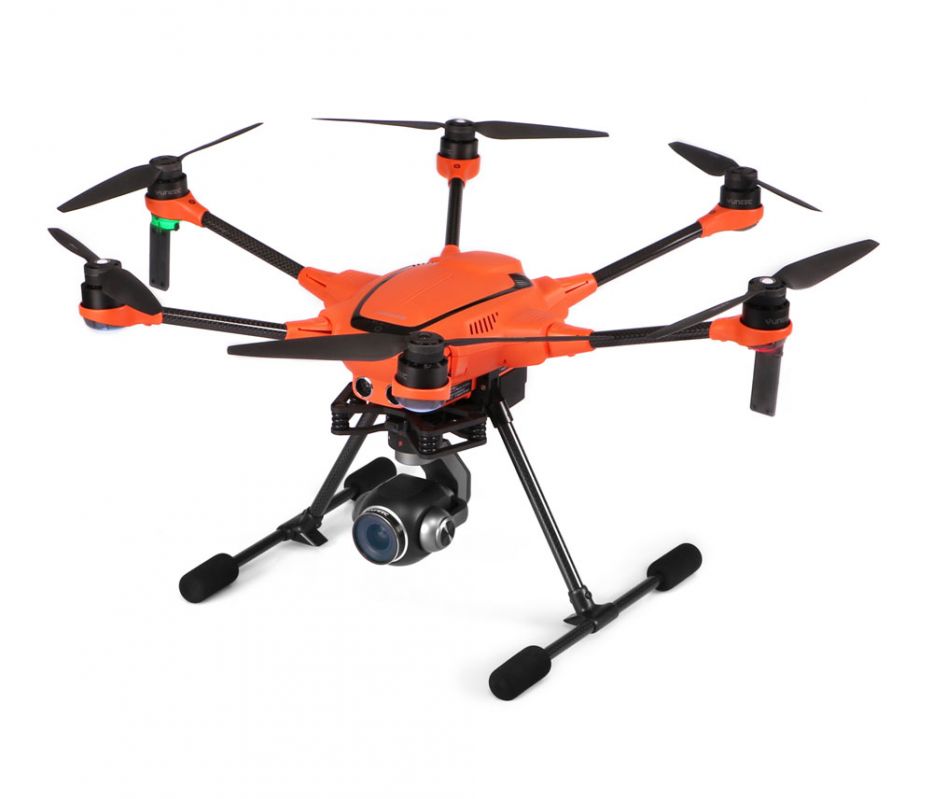 Intelligent Security Concept
The H520E-OFDM was developed with the highest demands on safety and functionality. The 6-rotor system enables a stable and safe flight by ensuring that the H520E-OFDM can continue to fly safely even if a rotor fails. Built-in ultrasonic sensors allow the drone to detect obstacles and avoid collisions, while the battery issues battery warnings when the voltage is too low and finally changes to a fail-safe function. In addition, the H520E-OFDM is equipped with a redundant control signal, a return home and a geo fence function, which ensures that the drone does not move beyond a radius specified by the user. 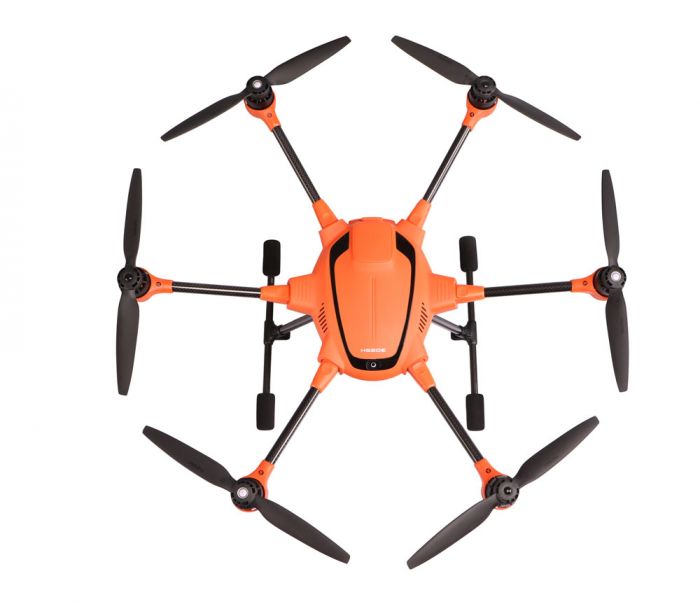 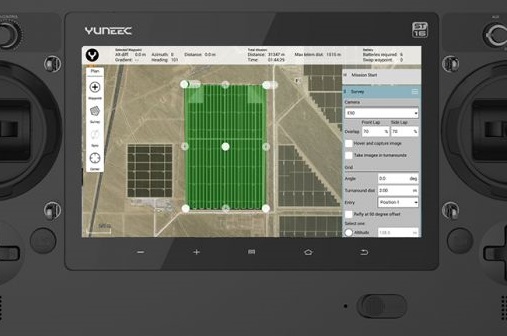 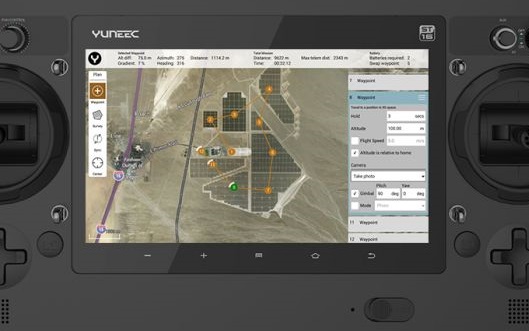 Versatile Payload Options
Thanks to its multiple load options, the H520E-OFDM can be easily adapted to different areas of application. Currently, the E10TX / E10TvX thermal camera, the E30ZX zoom camera and the E90X photo / video camera are available to H520E-OFDM users. Thanks to the ability to replace sensors in a matter of seconds, downtime is minimized and productivity is improved. One gimbal-camera combination can be exchanged for another without power cycling the airframe. 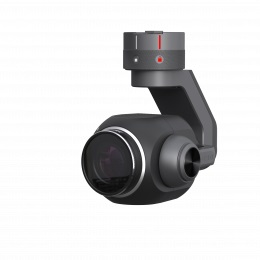 Protection Of Sensitive Data
The H520E-OFDM has been developed as a closed system, its technical design prevents communication with third-party servers. Communication only takes place between the drone, the payload and the ST16E remote control. Log files are stored locally in the drone and are only required by Yuneec for service purposes in the event of a guarantee. There is no involuntary data transfer to servers. Neither flight data nor images, videos or log files are forwarded to external servers and remain in your possession. Thus, your data is optimally protected.

A Click Away From Software Updates
The UpdatePilot app allows you to check and automatically update your drone, payload and remote control to the latest software version. Just open the app on the ST16E, make sure that WiFi and camera have been selected and then click on the “Check App Version” button – UpdatePilot will automatically download and install the latest update if necessary. Make sure that the H520E is switched on and note that the YUNEEC UpdatePilot can only be installed on the ST16E and a micro SD card must be inserted in the camera to accomplish the updates.

ST16E Controller
The Android-based ST16E is equipped with a fast Intel quad-core processor and OFDM support. Thanks to the OFDM support, the live image transmission can be expanded up to 4 kilometers. The integrated 7 inch display with touchscreen ensures precise and intuitive operation of the H520E and shows all flight information as well as the live image from the camera. The live image can also be transferred to a larger monitor via the HDMI output of the ST16E. During the flight, real-time telemetry data such as altitude, speed, distance from home, GPS position and battery status are shown on the display. Controls expected by professionals include adjustable video resolution and white balance, while light exposure can be controlled automatically or manually, including ISO and shutter speed. The ST16E supports team mode, allowing one pilot to control the drone while another controls the camera. 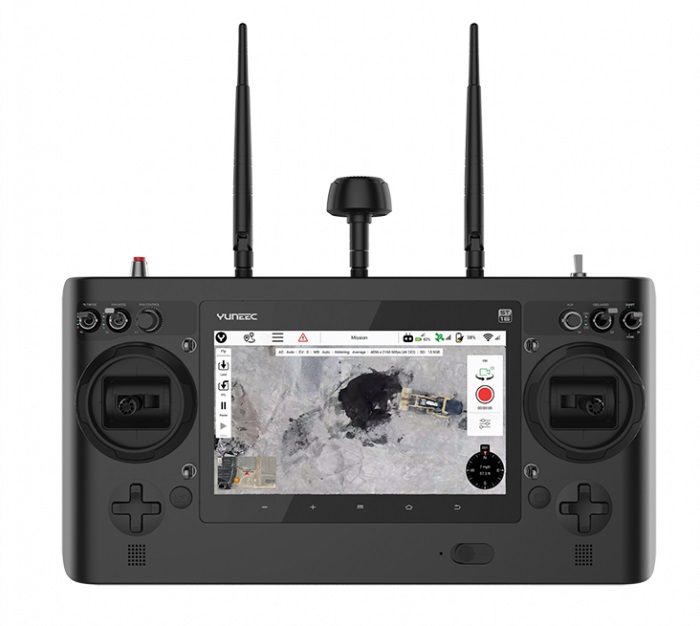 Site Mapping
Preconstruction survey, topographical measurements and project progress become concise and efficient using unmanned aviation solutions. The Yuneec H520E-OFDM is designed to fly repeatable, perfect-placement flight over construction sites, providing not only measurable and demonstrable project data, but also helping to identify shrink points or at-risk areas. Autonomous flight allows for repeated flights that may be layered to determine changes in the work site and provide comparisons over time. 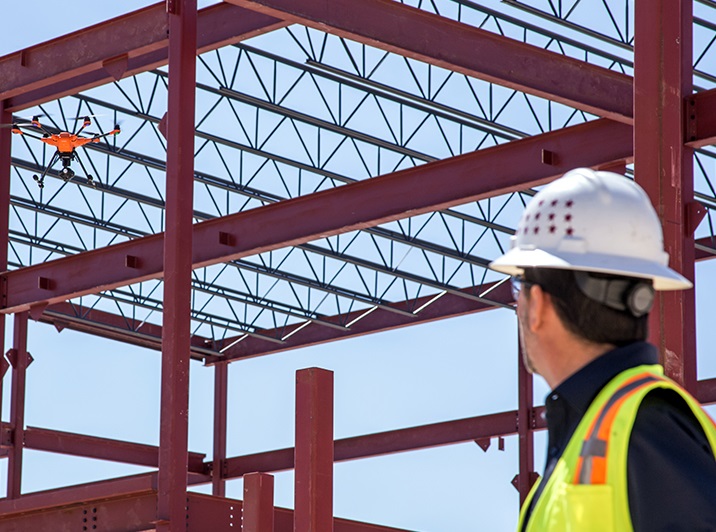 Inspection
Vertical structures can be inspected safely and efficiently with the precise flight behavior of the H520E-OFDM. Long focal lengths allow users to fly further back from the object being viewed, without compromising image quality or depth. DataPilot™ can store missions that require weekly or monthy re-flight for purposes of comparison, failure evaluation, or deterioration studies. The safety improvement and cost reduction with sUAS inspection are staggering in comparison. 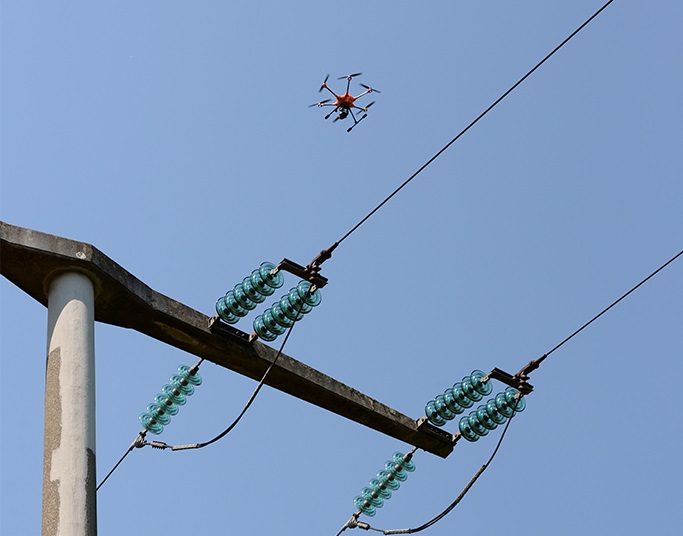 Law Enforcement
Accident scene reconstruction, crime scene mapping, as “eye in the sky” for crowd control or monitoring of targeted areas: The H520E-OFDM offers the necessary payloads for optimal performance. The Yuneec H520E-OFDM empowers Law Enforcement officers to quickly record an accident scene in 2D or 3D, for later assembly of data for court appearances, reporting, or archiving. High-quality camera systems with embedded GPS data enables evidence-gathering to be captured and examined before the crime, accident, or fire investigators or first-responders have entered the area.

Search & Rescue
The Yuneec H520E-OFDM enhances safety at a contaminated scene, speeds rescue and recovery, and offers scene management tools through thermal imaging and resource management. Firefighters appreciate the ability to “see” through smoke and rapidly identify hotspots using thermal imaging, and the ability to gain a birdseye view of operations on a large scene. In addition, the drone can be used for scouting the route ahead for obstacles, finding victims, photographing remote crash sites, terrain mapping, crash site monitoring or for improving communication. 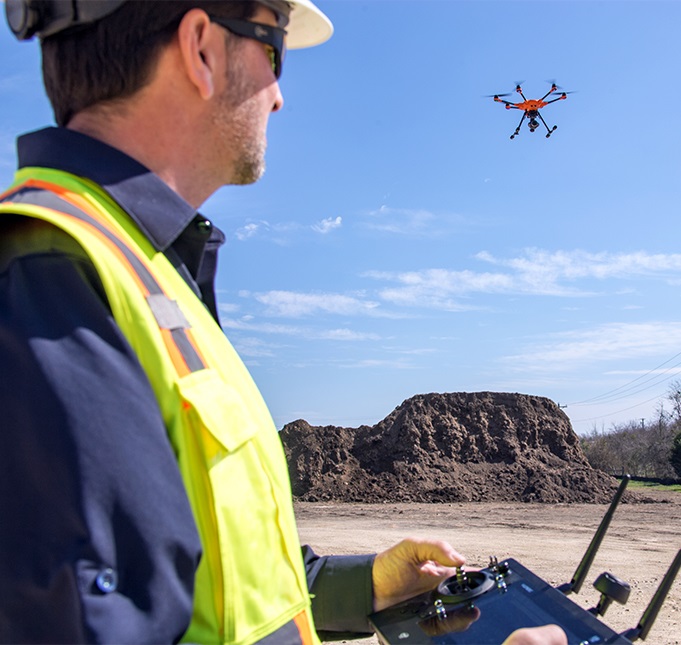 At what temperatures can the H520E be flown?
The H520 can be flown from -10°C to about 40°C. Note that the battery shouldn’t be cold. A cold battery can lose up to 40% of its performance. At temperatures above 40°C, the electronics may experience a heat problem during continuous operation. The system may need to cool down now and then.

What are the advantages of 6 propellers?
Resilience. The H520E can be landed safely even if one of the propellers breaks, is more stable in high wind and quieter than a Quadcopter.

When does the H520E turn on 5 Motor Mode?
If a propeller breaks down or a motor fails, the H520E will switch to 5 Motor Mode and keeps flying.

Which satellite systems does the H520E use?
GPS and GLONASS.

Can I use two ST16E controllers in team mode?
Yes, you will need DataPilot version 2.2.1 or higher on both controllers. To set it up follow this guide

How does the obstacle detection work?
The OBS is a forward faced system based on ultrasonic technology. Objects must be at least the size of a thumb to be recognised. The system can also be switched off. When the OBS is on, the airspeed is limited to 25 km/h.

Can maps be stored on the remote control?
Yes you can, but there is limited storage space. Make sure that no map is bigger than 100MB. Large maps will slow down the system unnecessarily. Spread the area over several small maps instead.

How often do I have to calibrate my H520E?
Whenever the copter is not flying stable in the air despite having GPS signal available or if the remote control in the DataPilot shows a red status code under “summary” or “sensors”. Calibration after changing the location is not necessary.

I've already re-calibrated the H520E, but the drone still flies unstable. What should I do?
When calibrating, make sure that there is no metal around the drone. This can affect the internal compass. Check the joystick movements in the RC Monitor. If the reactions to your movements are slow, you need to have your controller checked.

What happens if the radio connection to the H520E is lost?
There are two different radio links and two different types of connection losses. Communication lost – loss of image transmission (5.8GHz). The H520E remains fully controllable with all functions. As soon as the Copter regains a signal, the image transmission is restored.If the wireless connection is lost, the H520E automatically returns to the starting point. If the connection is restored during the return, RTL will not continue. The last known command will be executed.

What happens when the battery is depleted?
The H520E calculates depending on distance and battery voltage when emergency RTL is triggered. This ensures a safe return to the starting point. (From version 1.4.9)

Does the H520E have an emergency stop?
By lowering the stick “descend” and simultaneously pressing the red button three times, an emergency shutdown of the motors is triggered. Attention: Only use in an emergency case. A motor restart is not possible!

Why is my remote control working so slow?
Like any tablet, the memory of the Android tablet in the ST16E is limited. It becomes less and less with more copies of images, videos, maps, missions and other apps. This slows down your system.
To prevent/reduce lag consider the following:
– Only save maps (max 100MB) that you need regularly
– Copy files to another device and then Delete old pictures and videos from the ST16E from time to time
– Copy to another device and then Delete screenshots from the remote control from time to time
– Avoid installing other apps on the remote controller 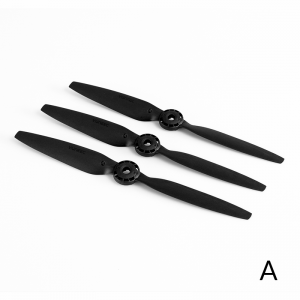 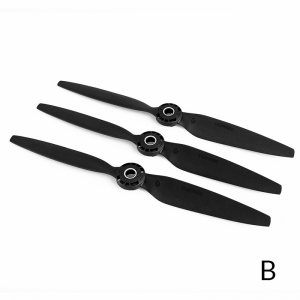 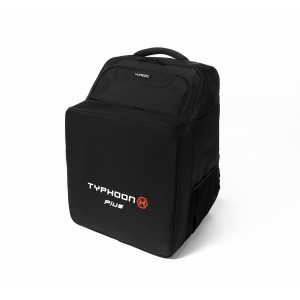 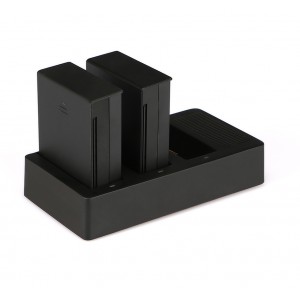 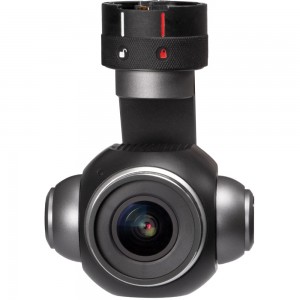 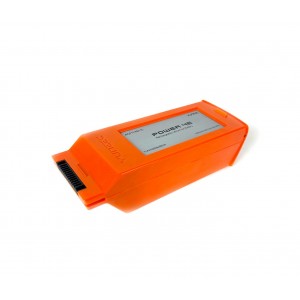 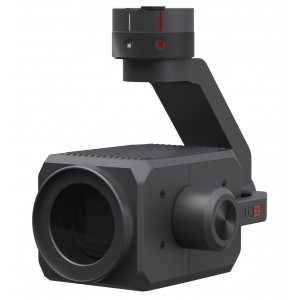 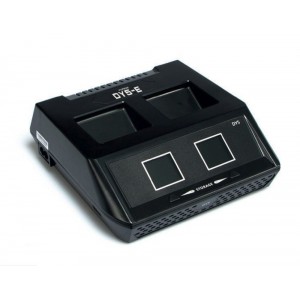 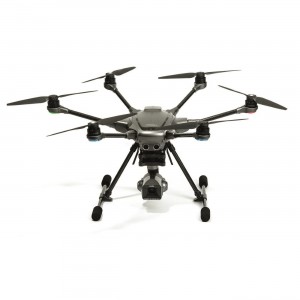 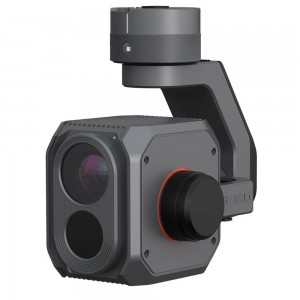 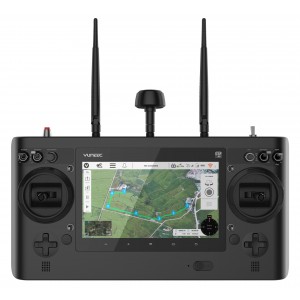 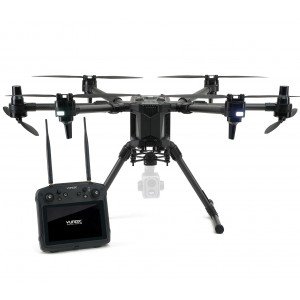