When I heard a new 'Drone-Port' was to be built in Coventry I was very excited. Concept cargo drones such as the 'Sabrewing' pictured below will become reality and take to the skies at some stage during this decade. Electric powered, autonomous and able to take off and land vertically before transitioning to convential flight once airborne will give them endurance, range and efficiency.

Over the last five years I have seen loads of articles saying drone deliveries are just round the corner so, hearing that a Drone-Port was to be built I pictured a large site on the edge of an industrial area where drones could make their approach safely over fields before landing. Likewise when a drone took off it would be in plenty of space away from people before taking off and climbing over fields and onto its journey. The government is already considering drone 'air lanes' somewhere around 400 feet where drones can fly safely between ports separated from manned aircraft. I imagined the new Drone-Port would have about 10 or 12 landing pads for the cargo drones where they could land safely, drop off their cargo, recharge or change their batteries and get loaded with new cargo. There would also be a hangar area where the drones could be moved into for periodic checks, maintenance and servicing as well as for collecting valuable data on how the drones are performing. The port would be co-located with a distribution company and there would be a collection point for the public to pick up orders. The distribution company and public would of course be safely located well away from the drone area; like a normal airport has landside and airside the new Drone-Port would have droneside and landside. All straightforward enough and with online shopping already being massive and getting bigger all the time, as well as the need for industry and business to get parts and stock quickly and efficiently, there are many companies that would benefit from the new Drone-Port. Along with this there are now several well established parcel delivery companies that would be willing to work with the new Drone-Port and companies that want to supply the drones, both of which would be willing investors. Then I saw this photo and my dreams were shattered... 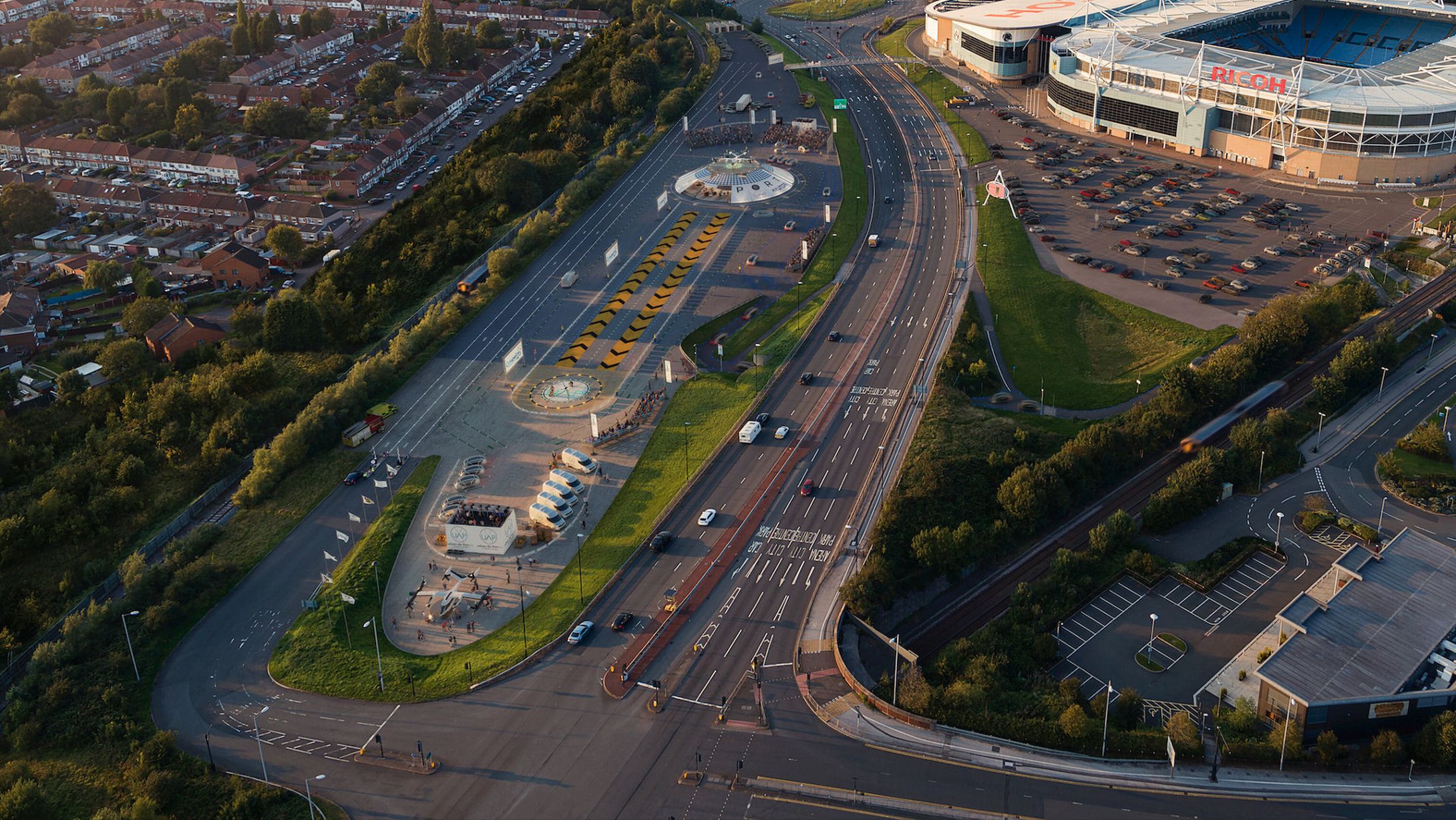 Why would you put a Drone-Port in a heavily populated area next to the Ricoh Arena? It didn't make any sense, the Ricoh Arena can hold up to 32,000 people, why would you want to have cargo drones anywhere near it? Then I looked closer at the picture; where is the car park? Where is the maintenance area for the drones? Why is it being built next to a main road? I have a drone that weighs less than 1Kg and when I fly it I have to keep at least 50 metres away from uninvolved people and roads, so why would we have cargo drones which could easily weigh half a ton next to a busy road? Then I looked closer at the picture and couldn't believe my eyes... 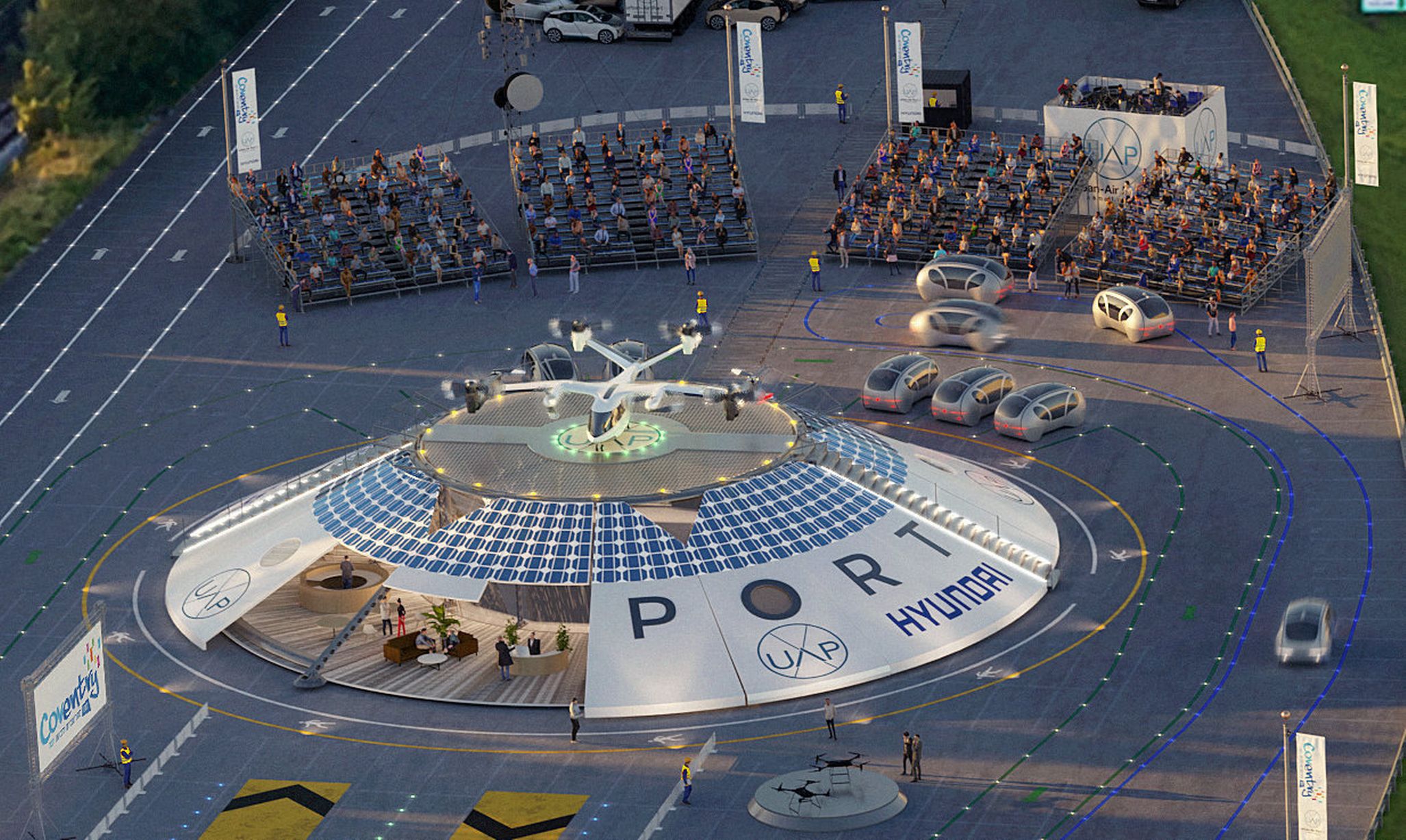 Was I mistaken? Apart from putting the new Drone-Port in what looks like the middle of a roundabout they also want the drones to land on top of some sort of flat topped cone with people working underneath! If the drone doesn't get its landing spot on it could very well fall on someone. Can you imagine a drone the size of a car with rotors whizzing round sliding down the side of that building and hitting someone? They could quite easily be decapitated! Then I noticed the people sitting around what looked like a few metres away. Why would you want to put a group of people near to huge drones operating? I literally had to check the date to make sure it wasn't April the first. There is no doubt that cargo drones will begin to operate over the next few years but it will not be like this. If anything, the 'Coventry Drone-Port' concept has moved us a step back rather than forward.